Carmignac CEO: The bull market has been tough and frustrating for active managers

For the past ten years, asset managers, be they active or passive, have been acting in a liquidity driven bull market. A feast for passive managers, but a challenging environment for active managers to prove their own worth in. However, that’s about to change, Didier Saint Georges, CEO of French risk manager Carmignac says in this exclusive interview with AMWatch.
by LYKKE OGSTRUP LUNDE

Even though winter is still felt, Paris is still beautiful as ever.

At the historic Place Vendôme, in the very heart of Paris, life is bustling by with tourist taking pictures of all the diamond shops, the Ritz hotel and an occasional photo shoot of a beautiful girl showing the summer collection of some fashion brand whilst trying to ignore the cold.

Here at one of - if not the most - expensive addresses in Paris, is the headquaters of independent French asset manager, or risk manager, as they prefer to call themselves, Carmignac. Sharing a building with the world famous jewelry company, Van Cleefs and Arpels, Carmignac is located in the very epitome of luxury, style and tradition.

AMWatch is meeting Member of the Investment Committee and Managing Director Didier Saint Georges for at talk about what the past ten years have done to the asset management industry, why Carmignac calls itself risk manager and not asset manager, and what the future holds for both the industry and for Carmignac.

First thing's first - the past:

"The last ten years have been very tough for active fund managers – not just because it was a bull market – but because it was a strange bull market. It was liquidity driven and not economy driven. This made active managers quite uncomfortable, and they have been on a steep learning curve to understand the potential of that kind of bull market," Didier Saint Georges says about the market that asset managers have been operating in since the financial crisis took its beginning in 2008.

A bull market is not for the select few asset managers. A bull market is for everybody. In that kind of situation, costs become a key point in the process of selecting mangers.

In the past ten years, almost anybody would have been able to create a positive return, and due to this fact the differentiation between managers has been minimal, and the one area of differentiation has been costs. And Voila – the perfect environment  for passive asset management is created.

"The flows have been going into passive funds, which in a sense has been self-reinforcing, because the passive funds that get more inflows by definition will buy the biggest capitalization stocks, and push them even higher. So the bull market has been self-perpetuated by the drive in passive funds," Didier Saint Georges explains.

Being located in a building that oozes with tradition and style, Carmignac sends a clear signal to their clients. However, one does not get the impression that this is an old fashioned company with a traditional approach to the world. Au contraire.

The offices themselves are old-fashioned with wooden panels, carvings and heavy drapes, but modern leather furniture with steel legs and art by artists such as Marilene Oliver and Horst Munch quickly lets you understand that this is a modern company with an understanding of the present.

Looking at the performance of the Carmignac funds, you understand what Didier Saint Georges means when he says that the past ten years have been tough.

The three flagship funds of the Risk Manager, Carmignac Investissement, Carmignac Patrimoine and Carmignac Securité have had mixed results when one looks at them over a 10-year period.

(The article continues below the graphic.)

However, if one looks at the performance since inception, Carmignac is by far superior to comparable market indexes. Since the launch in 1990, the Patrimoine fund has given a return of 777 percent, whereas the bechmark has delivered a return of about 389 percent return.

The Investissement Fund has an even higher degree of differentiation with a return since launch of 1560 percent versus a benchmark return of 302 percent. The fixed income fund Carmignac Securité has given an approximate 38 percentage point better return than the benchmark.

And this is where the titel of Risk Managers enters the picture. For why does Carmignac call itself risk managers? Just to catch people's attention, or does it have a deeper meaning?

"It is not totally coincidental that we call ourselves risk managers, " Saint Georges laughs and takes a civilized sip of his "petit café", served in small espresso cups with the Carmignac logo. On the table miniature Badoit and Evian bottles are at disposal for the thirsty in heavy square-cut glasses.

"In general, risk management is underestimated, we find. The long term story is one of long-term growth, because the world is growing, and so the equities markets will follow the trend of the real economy. But there will be times when everything tumbles. Like 1987, the mid 90's, 2001 and 2008. If you manage to cruise through these periods in time without getting hit too badly (risk management), it will make a huge impact to your long-term performance," Didier Saint Georges explains and underlines the contribution of risk management to long term performance by pointing out that the Carmignac Flagship funds did not lose money in 2001 nor in 2008.

"There is a conventional wisdom saying that if you are an active fund manager and you are right 60 percent of the time – you are very good. And this is true over lots of periods. However, what is not understood is that if just one of the 40 percent wrongs happen to be an early October 2008 or a March 2001. This is asymmetric risk – suddenly you have convexity that destroys these appearances of linearity. You can be completely wiped out." Didier Saint Georges lets the side of his right hand meet the table top in an underlining movement and looks toward me to see if I get the point.

What a fish does on land

Carmignac has around EUR 57 billion in Assets under Management, which puts the company somewhere between Storebrand and Handelsbanken, and according to IPE's latest listing gives Carmignac a placement as the 178th largest asset manager in the world.

So what does one do when the environment one would like to be in just isn't there anymore? A fish would develop lungs if it was forced up on land. To counter the challenges from the liquidity driven bull market, Carmignac ended up hiring new analytical skills and a new head of equities with a background in stock-picking in an effort to augment its alpha.

"We realized that the top-down macro view was not very helpful in making the right market calls and therefore up until it would the case again, the best bet was to increase alpha generation. We changed this in 2015, and that was already high-time because we were already several years into the liquidity-driven bull market," Didier Saint Georges says before he gets interrupted by a knock on the door. We are told that we have to leave the room. Eager clients are waiting to use the meeting room.

Being a company that grows with all the limitations of an old but fashionable building will throw at you also includes a shortage of meeting rooms the receptionist confides in me afterwards. Saint Georges shrugs it off and finishes his sentence:

"We are at the verge of entering a time where a top-down, macroeconomic analytical approach will start generating value again. If you have that plus the alpha generation as well as the risk management, then you have a good setup as an active fundmanager. Let's see how the passive funds do in a bear market."

The future is also for active managers

Another knock on the door prompts the head of communication to get up and leave the room. Few minutes are left for asking questions about the future:

How do you see the potential threat of Artificial Intelligence and Fintech?

"I think that AI and alike are changing the rules of the game for short-term trading. They can really arbitrage away a lot of immediate price opportunities. When it comes to catching the key inflection points, I think it will be much more difficult. Will AI know what to do when Lehman is declared bankrupt on a Sunday afternoon? And understand ramifications on markets and how to handle those risks?"

Saint Georges seems convinced of the continued need for human skills and for managers like Carmignac. Having just opened their first US office in the last quarter of 2017 Carmignac seems locked in on conquering the future. But only through organic growth.

"We have no intention of growing through acquisitions. It would pose a potential distraction out of proportion. Our growth model has worked for 30 years as well as our investment approach, so we are not about to change," Didier Saint Georges says and wraps it all up by saying: " Our model has been and will remain one where the ambition is to be among the very best in the few categories we compete in and that's where the bulk of the asset growth tends to be concentrated."

The door opens again. This time the woman peeking in the door means business. We have to leave the room. Clients come first, and right now there are six of them waiting by the Marilene Oliver plexiglass sculpture.

But first a selfie with Didier Saint Georges and then good bye.

(The story continues below the picture) 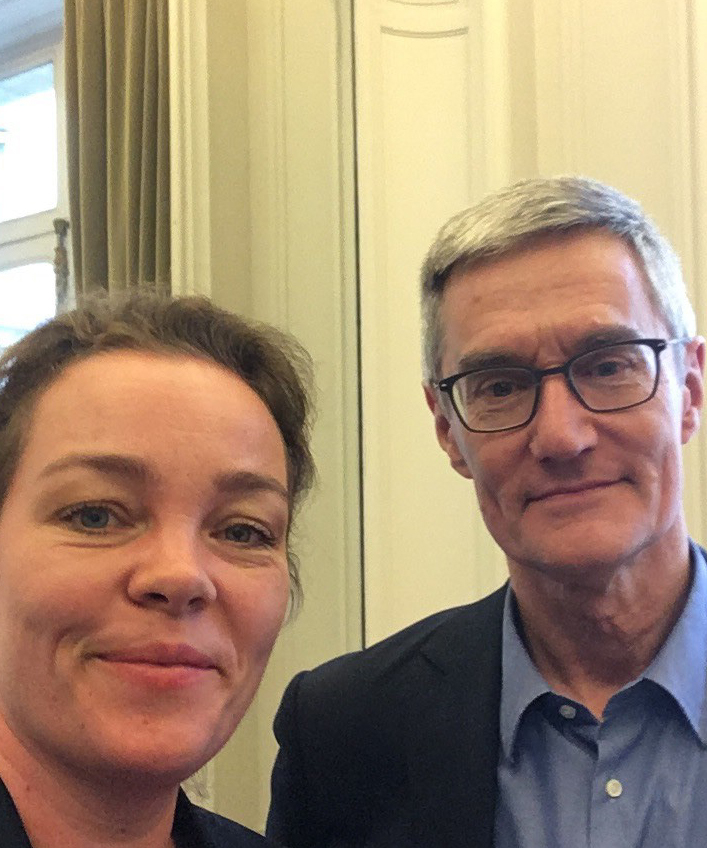 The red carpet clad stairs lead me back outside to a stunning view of the Vendôme pillar, Rue de la Paix and all the exclusive shops. Only slightly disturbed by the comprehensive renovation work going on in the square. The driver taking me to the airport doesn't care for active managers. He thinks they are all about making money of the rich for the rich. He thinks the future lies within Artificial Intelligence.

Carmignac has had 29 years to build a solid foundation for the future. Whatever it may bring.

Stay ahead of development by receiving our newsletter on the latest sector knowledge.

Oil fund has nowhere to hide from the turbulence of 2022

All the sectors in the equity market yielded negative returns, with the exception of energy, says CEO Nicolai Tangen of Norges Bank Investment Management.

Some funds have realized that they have overpromised on the ESG rating of their funds and decided to backtrack on the classification. But how are investors going to trust this field of investing if there are constant changes? asks Andreas Nilsson, Head of Impact Investing in Golding Capital Partners.

Oil fund has nowhere to hide from the turbulence of 2022

All the sectors in the equity market yielded negative returns, with the exception of energy, says CEO Nicolai Tangen of Norges Bank Investment Management.

Three Danish pension funds are the first investors in a new fund that aims to spare the earth from carbon of 1GT before 2050, equivalent to 23 times of Denmark’s total annual emissions.

Microsoft is in the process of discontinuing Internet Explorer – and so are we.
For a better experience, we recommend using one of the following browsers.